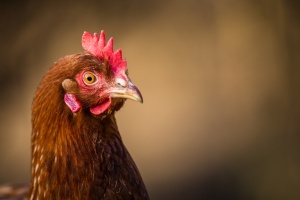 This is so very, very silly, but chickens scare me. Those beady eyes. The jerky move of their heads. The unexpected running. It is all too much.

But, my granddaughter, Zara, and her parents raise chickens. And, my choice when I visit them is to try to relax and be pleasant or to stay in the house and peak from behind the curtains. I chose to try to relax. It isn’t easy. But, watching Zara with the chickens is comforting. She knows them, she talks to them, she tells them what to do, and she cares about them. I don’t mind being NEAR her chickens (notice that I did not saw “with them”) when I am with her. Even the huge, beautiful rooster with the beautiful, shiny black feathers on his head and neck, seems to respect Zara.

Fast forward to our house. Our neighbors have added chickens to their household. This week, I was dropping off Christmas goodies and went up to their front porch. I rang the doorbell – no answer. And, then I turned around. There were chickens everywhere! While I was focused on the door, they had snuck up behind me!! Acckkkk!! Chickens!!!! And, so I pretended that Zara was with me. I talked to the chickens. I told them that I hoped that they were going to have a Merry Christmas (silently praying that the biggest ones would be the featured menu item for a holiday feast) and I started walking. They flapped, they squawked, they looked at me. It wasn’t fun but I needed to drop off the goodies and the front porch looked like it got little human foot traffic. I headed to the back and the chickens formed a circle around me. Arrggghhhh!! I praised God for Kentucky Fried Chicken.

As I left the back porch, gift set on an outside table, the chickens followed me to the car. I was braver now. I made my way into the Explorer, telling the chickens that they were not welcomed to come along. It was then that my neighbor emerged from the house. (Had she been watching and listening? I will never know.) We exchanged Christmas greetings and chit chatted a bit and then I headed home.

It is so silly what scares us. Nowadays, I am less scared of chickens and more scared of saying the wrong thing, of inadvertently causing hurt or pain, of not being there for those who need me, of not being what God wants me to be.

Like sweet Zara and her chicken whispering ways, I have a comforter. I have the Holy Spirit, guiding and teaching. As we gather together this Christmas, someone will make a mistake. Someone will be upset. Let’s take time this to recognize that those mistakes are just like chickens – noisy and, perhaps, a little scary, but just silly mistakes. When we feel the pain or we cause the hurt, let’s remember to pray and to love.

“In those days Caesar Augustus issued a decree that a census should be taken of the entire Roman world. (This was the first census that took place while Quirinius was governor of Syria.)  And everyone went to their own town to register.

“So Joseph also went up from the town of Nazareth in Galilee to Judea, to Bethlehem the town of David, because he belonged to the house and line of David.  He went there to register with Mary, who was pledged to be married to him and was expecting a child.  While they were there, the time came for the baby to be born,  and she gave birth to her firstborn, a son. She wrapped him in cloths and placed him in a manger, because there was no guest room available for them.

“And there were shepherds living out in the fields nearby, keeping watch over their flocks at night.  An angel of the Lord appeared to them, and the glory of the Lord shone around them, and they were terrified.  But the angel said to them, “Do not be afraid. I bring you good news that will cause great joy for all the people.” (Luke 2:1-10)