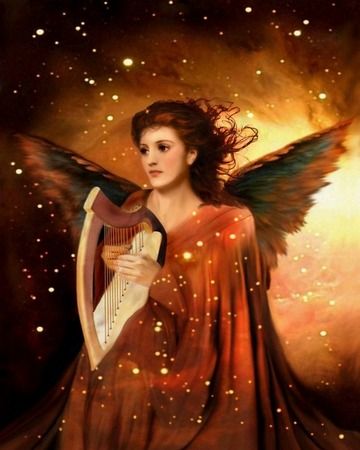 Last night John and I enjoyed a wonderful concert of Christmas music performed by students from Pensacola Christian Academy. We have a friend who was playing in the concert and we enjoyed seeing her. It was a fun evening.

We just happened to get seats right next to the side stage that was filled with harps. Other than a life-long love of music, I know nothing about how students play the harp. Before last night, I would have told you that most harp music is “strumming” of the strings. You know what I mean, “heavenly music” kind of sounds. But, the songs played by the harps last night had very little “strumming”; instead, most of the playing involved “plucking” the strings.

The music was beautiful and the students were fun to watch. They worked hard. Beginning students played parts with much less complexity than did the students who seemed to have more experience. I enjoyed it all!

It got me to thinking about why we connect harps with angels. I have seen many Hallmark Christmas cards with beautiful angels in the heavens, announcing the arrival of the Messiah to the shepherds. A few of those cards show both singing angels (making the official announcement) and harp-playing angels (keeping the singers on key). But, perhaps even Hallmark doesn’t have it exactly right.

It is true that the harp is mentioned many times in the Bible. David, the mighty warrior who killed wild beasts, played the harp. So, harp playing isn’t just for girls wearing flowing gowns. Most lists of musical instruments in the Bible include the harp. In the book of The Revelation (the last book in the Bible), the writer tells us that the harp will be played (with other instruments) when all of heaven celebrates the complete destruction of evil.

Maybe the kids who are studying the harp have a leg up on the rest of us.

On the other hand, there have to be other tasks involved in planning and conducting the greatest heavenly celebration of all. Assuming I continue on my path of following God and getting to heaven, I’ll be happy with any job.  Maybe I can set up the chairs for the harp players or hand out programs or work in the concession stand selling “angel food” cake.  (sorry!)

At the arrival of the Messiah, the heralding angels (playing harps or not) had a pretty glorious job. It looks pretty good.  But, to be honest, I think I would have preferred to be a shepherd who got to join Mary and Joseph at the stable.  They got closer to the Messiah.  Sometimes the “glamor” jobs aren’t the best ones.

Jill (just one of God’s kids)

“And there were shepherds living out in the fields nearby, keeping watch over their flocks at night.  An angel of the Lord appeared to them, and the glory of the Lord shone around them, and they were terrified. But the angel said to them, “Do not be afraid. I bring you good news that will cause great joy for all the people. Today in the town of David a Savior has been born to you; he is the Messiah, the Lord. This will be a sign to you: You will find a baby wrapped in cloths and lying in a manger.” Suddenly a great company of the heavenly host appeared with the angel, praising God and saying, “Glory to God in the highest heaven, and on earth peace to those on whom his favor rests.” When the angels had left them and gone into heaven, the shepherds said to one another, “Let’s go to Bethlehem and see this thing that has happened, which the Lord has told us about.” (Luke 2:8-15)